Share
0 comments
When I started in the industry, independently selected and controlled music in every room was the preserve of the very rich. I designed and built some incredible systems (including for a certain Robbie Williams), but they were complicated and expensive. Nowadays good quality wireless home sound systems are within reach of everyone. Let's look at the market leader, Sonos, and compare it to Yamaha's MusicCast.

At this point I want to make a distinction between dotting a few compact wireless speakers around the house, and use of higher quality in-ceiling or in-wall speakers, or standalone speakers.

The former does a pretty decent job, but as a music lover I'm more interested in getting the best possible sound, yet also have the convenience of selecting and controlling my music from a phone or tablet, in a number of locations in the house.

Maybe in another article, I can look at the more primitive 'wireless speaker' options, but this article is more concerned with getting as close to the quality and convenience of the systems I designed 15 years ago, but at a fraction of the cost.

A sample use case

Let's draw up a scenario. Let's say I want to be able to listen to music in the following rooms:

Imagine I've listened to something like the range-topping Sonos Play:5 (£430), and compared it to a similarly priced amplifier and speaker setup, or experienced a demo of in-ceiling speakers, driven by a power amplifier, and I'm inclined towards the aesthetics and convenience of music built into the wall or ceiling, and prefer the sound of dedicated speakers, so I opt for some dedicated, free-standing speakers in the living room, but in-ceiling speakers elsewhere.

Let's assume we've chosen the speakers, and they've been installed - the cost is the same. How are we going to bring them to life?

Sonos provides three ways to listen to music - the wireless speakers (which we've decided against), the Connect:Amp, which is effectively a small, dedicated integrated amplifier, which can drive a pair of speakers, and be controlled from a mobile device, or the Connect, which offers the same functionality as the Connect:Amp, but delegates to amplification to a separate (non-Sonos) component. Both the Connect and Connect:Amp can be hooked up to a stereo source such as an amplified turntable, allowing that source to be shared throughout the house. 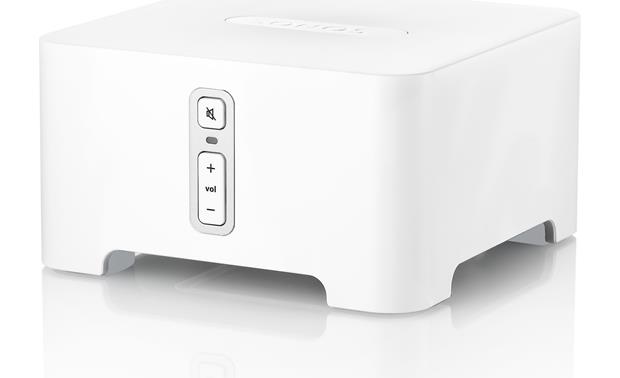 Both can, of course, be mixed and matched. The Connect:Amp is convenient for a small dedicated system, but depending on the number of rooms, it may prove to be more cost effective to buy a multi-channel power amplifier and use the unamplified connects. Similarly, for higher quality output, the Connect could be used with a better quality stereo power amplifier, and/or a dedicated DAC. All the control units and amplification could be kept out of sight.

Once set up, Sonos connects to your existing home network, and then creates its own dedicated network, purely for music. All music is sent over this network, so it isn't interrupted, and is very reliable.

Music can be access from a server on the network such as a NAS, or an iTunes account, and there's a huge range of streaming services available, including Tidal, Spotify, Apple Music, Google Play, and many more.

The music itself can be controlled from the Spotify app, which is exceptional. Easy to use, responsive, and very well thought-out, it makes the task of selecting and playing music entirely seamless. It can also be integrated with any Amazon Echo device, allowing it to be controlled by voice. 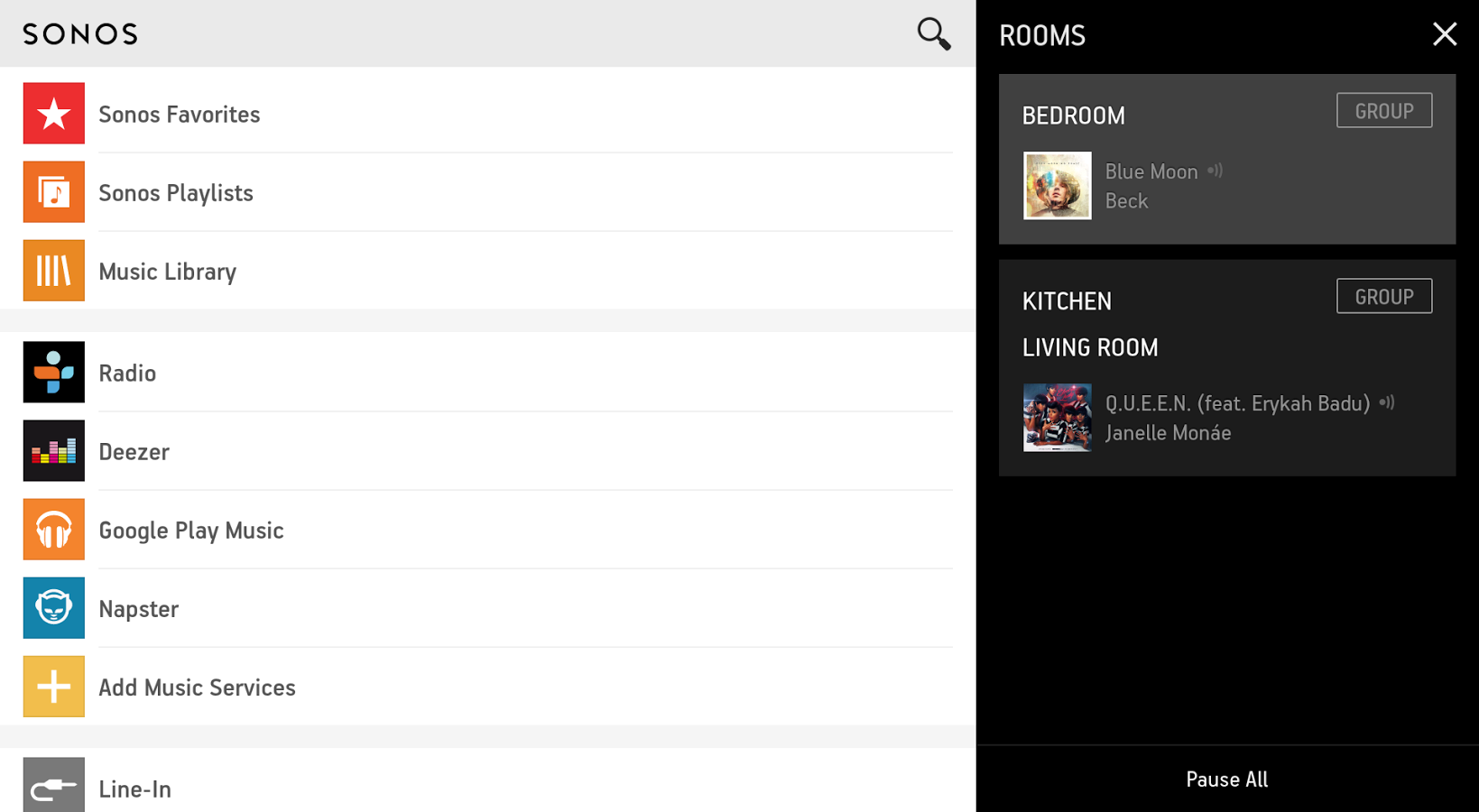 In terms of sound quality, if used with a service which streams CD quality music, its digital to analogue converter can handle it, and the quality will be close to that of a directly attached CD. A clever and unique feature is the ability to provide room equalisation, via the microphone of a smartphone or tablet.

Yamaha has similar hardware options, offering a both unit with a built-in amplifier, the WXA-50, and the WXC-50 pre-amplifier, which connects to a separate amplifier, and/or DAC. Both have the option to connect a stereo component such as a powered turntable, for distribution around the house. In addition, Yamaha provides the WXAD-10 streaming adapter, which adds streaming and control functionality to anything with a stereo input. 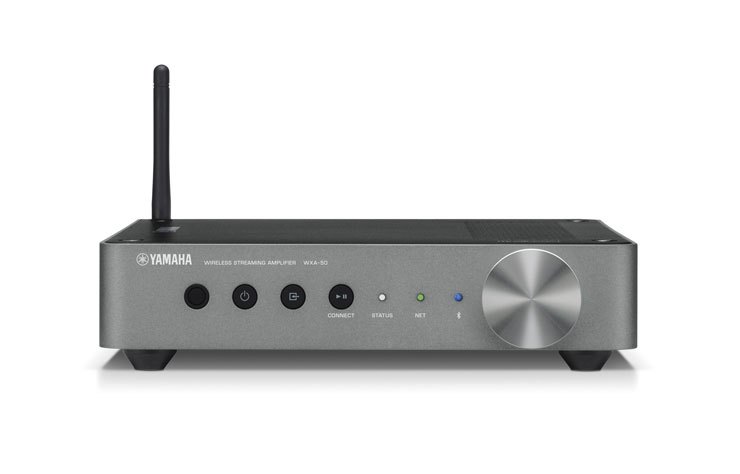 However, Yamaha adds another massive alternative - its MusicCast functionality is built into its range of Stereo Network Receivers, providing audiophile quality music reproduction, DAB and FM tuner, and built-in phono stages, and its Home Cinema amplifiers and processors. These all link seamlessly with each other, and opens up a much bigger world for audio distribution. 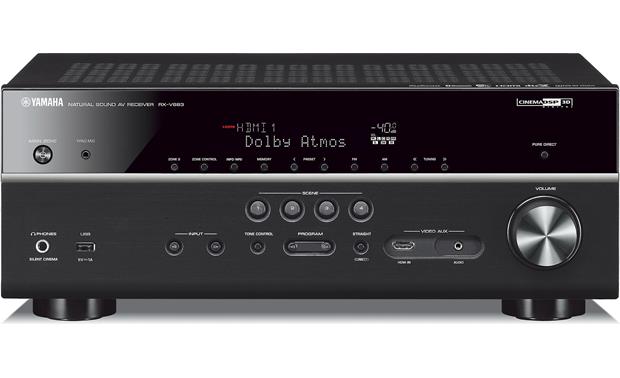 The MusicCast components sit on the same network infrastructure as the rest of the house, and can be connected wirelessly or by ethernet cables. Although this sounds like it could cause congestion, in practice a modern home network will be set up for Gigabit connectivity, and even with HD music and video streaming, together with day-to-day usage, the local network won't be saturated.

Like Sonos, the MusicCast products can play music from the local network, via, eg, a NAS or iTunes collection, and provides the usual range of popular online music services such as Spotify and Tidal, and internet radio. It doesn't have access to Apple Music or Google Play. However, by way of compensation, it does support both Bluetooth and Airplay, meaning that any device in the house can be instantly connected to the network and distributed, and Apple Music or Google Play, or even podcasts can be sourced from a mobile device or laptop, and immediately made available, along with whatever music is on the physical device itself.

The MusicCast app is well-designed and mature, and easy to navigate, but is not as responsive as the Sonos app, and the user experience while still excellent falls short of the outstanding benchmark provided by Sonos. Like the Sonos, the MusicCast can also be controlled via Alexa. 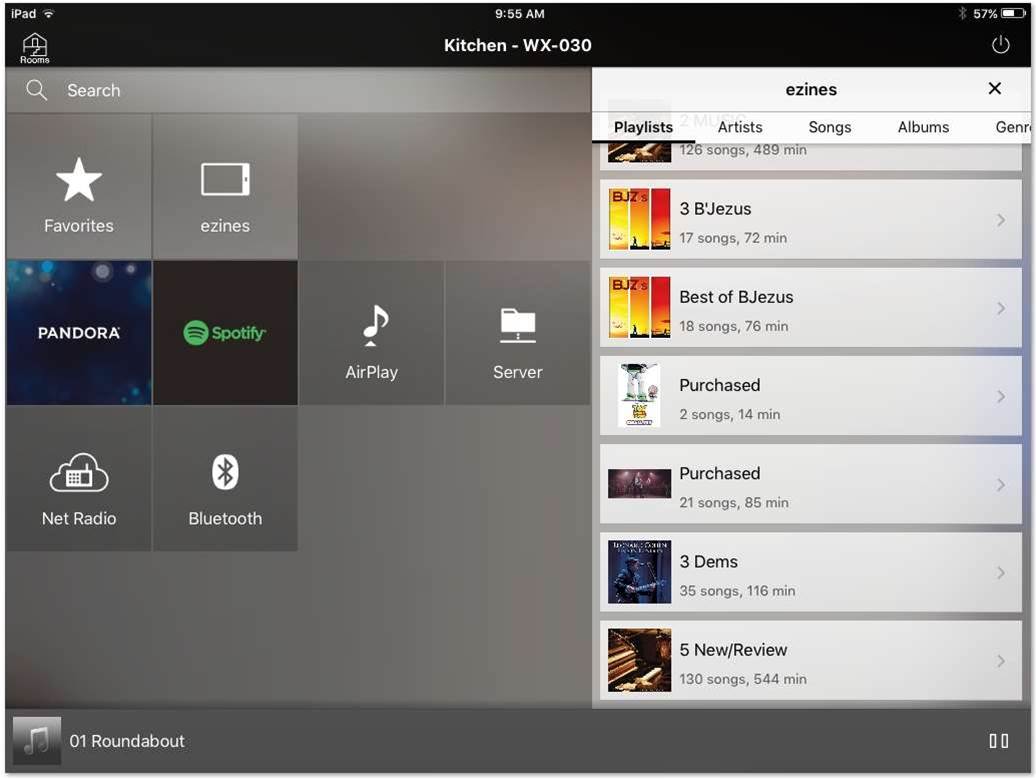 Unlike the Sonos, the MusicCast system fully supports high-resolution 24 bit / 192 kHz music, in addition to the CD quality and lesser resolution that Sonos offers. The on-board DACs are excellent, and the integrated amplifier is more powerful, and in sound quality, Yamaha's musical and hifi pedigree shows through.

Price-wise, the MusicCast is very competitive. The integrated amplifier is £449, the pre-amplifier is £329, and the adapter is only £149. Adding in the £699 power amplifier, the cheapest solution would be £1295, but for less than the cheapest Sonos setup, the main listening room could incorporate the range-topping R-N803D stereo network receiver, providing outstanding quality amplification.

Sonos has been the market leader in entry-level multiroom and wiresless home systems for a long time, and with good reason. Sonos provides great sound quality, an excellently designed and proven ecosystem, a bullet-proof network infrastructure and a class-leading app experience at a highly affordable price.

Yamaha has been in the same market for almost as long as Sonos - Sonos launched in 2002, and MusicCast was released in 2003, but for many years has been playing catchup. However, with the release of the latest batch of products in 2017, and with the onboarding of more streaming partners, the gap has been well and truly closed.

In favour of Sonos is the network architecture, the superb app, and the nifty room equalisation. However, I debate the extent to which the dedicated network is needed if the home network is well-designed in the first place; the Yamaha app is still very very good; and in reality I've never been impressed by anything other than true professional room equalisation, and I'm skeptical that it can be implemented effectively as an add on to a £350 box.

Once you factor in Yamaha's music and hifi credentials and pedigree, the integration with the AV and Stereo receivers, and the ability to support high-res music, bluetooth, and airplay, I'd say Yamaha has edged ahead in the race. Now consider that all of this functionality is available for less money, and I think we have a clear winner: Yamaha MusicCast is the best wireless home sound system.

Stephen Nelson-Smith is founder and principal consultant at Expressive Audio, in Chichester, West Sussex. An early advovate, designer and programmer of complex multiroom systems, and experienced network and systems administrator, he relishes the opportunity to blend convenience and audiophile quality for the discerning listener. 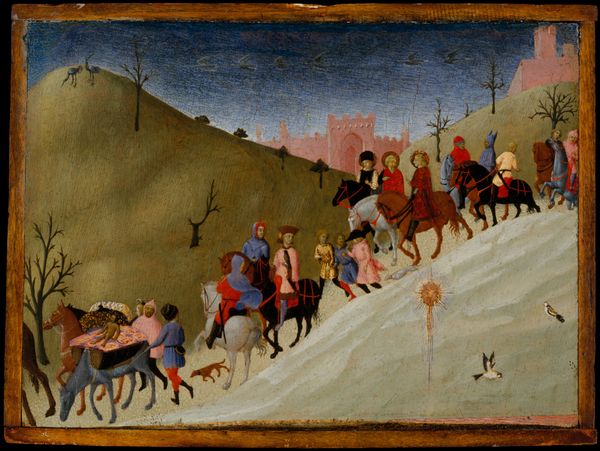 The musical life of Portsmouth Cathedral is busy, varied, and a wonderful source of ideas and inspiration. Two of my children are choristers there, and master of choristers David Price 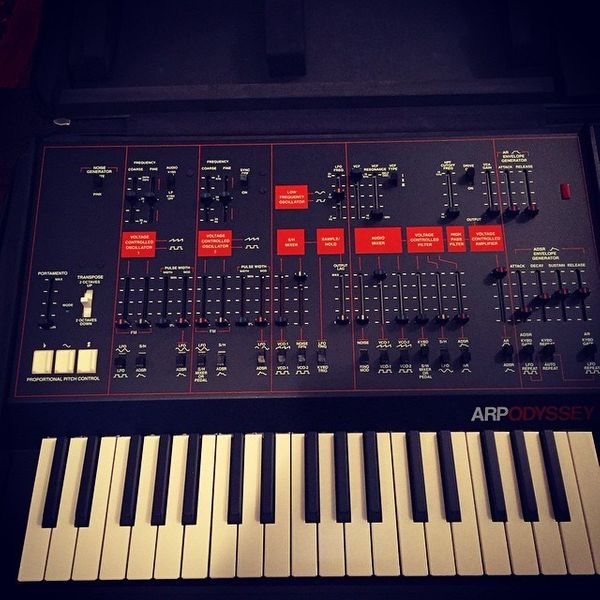 Occupying pride of place in my record collection are the four studio albums released between 1980 and 1984, by 'New Wave' band Ultravox. Frequently, music from one's childhood and early